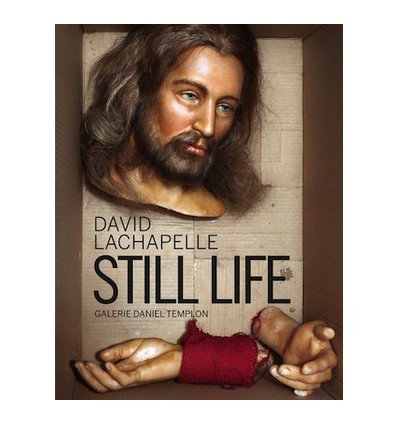 To mark the beginning of his collaboration with the Galerie Templon, American photographer David LaChapelle will be presenting two powerful series in France for the first time: Still Life, and the innovative Last Supper. World-renowned for his highly colorful fashion photography and flamboyantly baroque portraits of celebrities, David LaChapelle surprises us here with a new approach that bears witness to his interest in the underside of the American dream and the history of art.

David LaChapelle is an icon hunter obsessed by the question of notoriety, and when vandals had attacked the Dublin Wax Museum he traveled there to make a record of the broken lookalikes, which led him to investigate many wax museums in the United States (California and Nevada).

The high point in this series is a new photographic fresco reinterpreting Leonardo da Vinci’s Last Supper. In LaChapelle’s interpretation, figureless floating heads and expressive, yet completely detached, hands shown inside cardboard boxes compositionally represent the original masterpiece in an accurate yet startling contemporary way. The fragments of the broken models offer an image of raw piety, strangely resonant of the martyrs of Christian iconography.  This is a recurrent subject for the artist who consciously or unconsciously mixes the sacred with the profane. This large panoramic image is nearly four metres wide, and owes as much to the tradition of the religious polyptych as to collage. Ten years after LaChapelle’s iconic Homeboy Last Supper, merging street art and religion, the artist continues to reflect on the resurgence of the spiritual in our material dominated society.

The biblical wax figures were spared disfiguring by the vandals. The wax figures in the Still Life series were not as fortunate. These photographs depict distorted wax figures of celebrities, from Leonardo DiCaprio to John F. Kennedy, Madonna, and Lady Diana. The hyper realistic style of the images confers a feeling of authenticity on these damaged imitations - these forgotten facsimiles - made all the more disturbing because many of these real life people (celebrities) had already been photographed by David LaChapelle.

The Still Life series reaches into the dark side of pop culture.  Reflecting on the fragility of fame and power of the Hollywood Star System, the series examines the appeal for us of the stars' replicas, their wax figures. These human "still lifes" with broken faces, also relate to our fascination for the spectacle of the downfall of our once adulated heroes. With these frightening portraits of stars condemned to museum storage closets, David LaChapelle takes a new humane look at the faces of our archetypes.

Born in 1963 in Connecticut, USA, David LaChapelle is an internationally renowned artist known for his vivid fashion photographs and baroque images populated by celebrities. Skilfully fusing art history with references to popular culture, metaphysical questions with street culture, he paints a disquieting portrait of 21st century values and lifestyles. David LaChapelle is now one of the most widely published photographers in the world. Since 2006 he has been focusing on the artistic side of his work.