> Books>Kehinde Wiley - An Archaeology of Silence 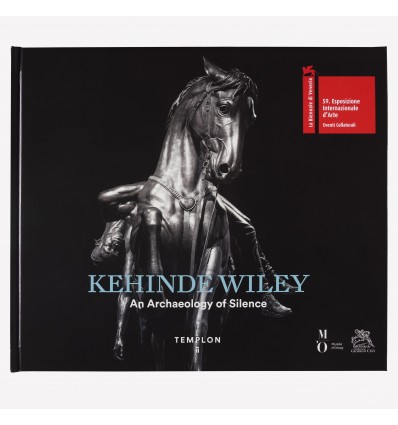 Kehinde Wiley - An Archaeology of Silence

The Kehinde Wiley: An Archeology of Silence exhibition , curated by Christophe Leribault, is in collaboration with the Giorgio Cini Foundation and is a parallel event of the 59th International Art Exhibition of the Venice Biennale, organized by the Musée d'Orsay, Paris and with the support of the TEMPLON gallery.

In this new body of work, Wiley highlights the brutality of the colonial, American and global past, using the figurative language of the fallen hero. The exhibition will include a series of unpublished monumental paintings and sculptures, expanding his 2008 body of DOWN work.

Initially inspired by Holbein's painting The Dead Christ in the Tomb, as well as historical paintings and sculptures of fallen warriors and figures in the resting state, Wiley created a haunting series of prone black bodies, reconceptualizing classical pictorial forms to create a contemporary take on portraiture. monumental, which resounds with violence, pain and death, as well as ecstasy. For this new body of work, Wiley has expanded on these core thematic elements to ponder the deaths of young blacks killed around the world. Technology allows us to witness these atrocities that were once unspoken. Wiley states, "This is the archeology that I am unearthing: the specter of police violence and state control over the bodies of young blacks around the world."

In light of current global conflicts, the language about power struggles and inalienable human rights is more critical than ever.
The new portraits show young black men and women in positions of vulnerability telling a story of survival and resilience, revealing the beauty that can emerge from tragedy. Their poses have been borrowed from historical sources of Western European art that serve as extraordinary elegies, evoking the central metaphor of youth and resilience, and stand as monuments to endurance and perseverance in the face of ferocity, incorporating a scale that pushes beyond the mere corporeal and into the realm of spiritual icons, martyrs and saints.

The exhibition is curated by Christophe Leribault, President of the Musée d'Orsay and the Musée de l'Orangerie, who previously curated Wiley's first exhibition in France at the Petit Palais in 2016 Kehinde Wiley: Lamentation. Leribault, an art historian specializing in the nineteenth century,  has a deep connection with the historical-artistic basis of Wiley's work.