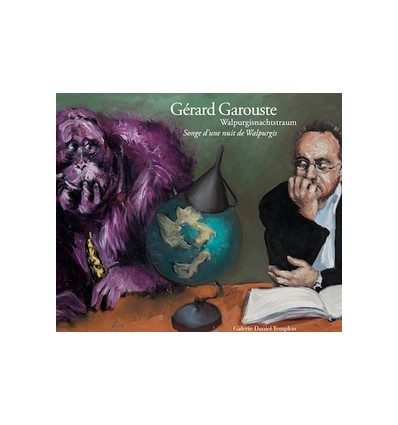 Three years after his last exhibition, Burgundy, Family and Lukewarm Water, Gérard Garouste returns to Galerie Templon to show a new collection of his works inspired by Goethe’s Faust.

Gérard Garouste has long been fascinated with the influence of Christianity on our culture, and has chosen to explore the myth of Faust as presented by Goethe in 1808: a man arguing with God and the Devil about his fate.

Using oil on canvas, gouache and bronze, the artist examines the main themes of Goethe’s tragedy: the quest for knowledge, desire for pleasure, nature of evil, the idea of wagers and pacts with the malevolent forces and alchemy, and individual accomplishment.

Gérard Garouste’s interest in the founding texts of Western culture began in the 1980s. After Dante’s Divine Comedy, Cervantes’s Don Quichotte and Rabelais’ Gargantua, he has spent ten years or so examining sacred texts, primarily the Bible. With Faust, Garouste signals his return to literary sources, even as he continues his fundamentally political questioning of Christianity and Judaism.

Gérard Garouste's baroque paintings, combining the unsettling with the joyous, are inhabited by variations on the various protagonists—Faust, Mephistopheles, Marguerite, the witches—and fantastical creatures—apes and hag, scape-goat and pig steed.

As in his previous work, Garouste uses the faces of his friends and family to illustrate the various characters. As a reminder of his recent autobiography, a great many self-portraits are also featured, constantly metamorphosing between Mephistopheles and Faust. In L’Intranquille: Autoportrait d’un fils, d’un peintre, d’un fou, published in 2009, Garouste revealed his battles with his anti-Semitic father and his own struggles with insanity. Walpurgisnachtstraum is another examination of his preoccupation with the concept of “The Classic and the Indian”: the artist’s mastery of the rules of classical painting is counterbalanced by the “Indian”’s total pictorial freedom, intuition and wildness.

Gérard Garouste’s sculptures also play an important role in the exhibition, with the artist returning to the casting work he abandoned during the 1990s. In 2010 he was commissioned to create a monumental work as part of the renovation of a private mansion in Paris’s rue de l’Université. As a result of this renewed urge to create sculptures, the exhibition will be showing new works in bronze.

A 80-page catalogue will be published for the new exhibition at Galerie Templon, with contributions from curator Bernard Blistène, mathematician Henri Berestycki and critic and art historian Aurélie Barnier.

Gérard Garouste - The Other Side