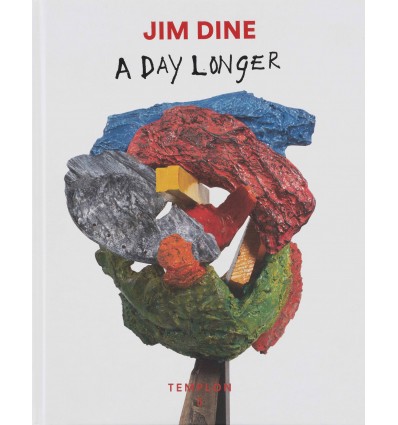 At 85, Jim Dine, the iconic figure of American contemporary art, is unveiling the results of almost three years of work in a new show at Galerie Templon. Partially produced at his Parisian studio during lockdown, the exhibition A Day Longer takes us on a thrillingly immersive journey into a body of work that is bolder and more introspective than ever.

Jim Dine adorns the classicism of the gallery space on Rue Beaubourg - entirely redesigned by architect Jean-Michel Wilmotte this summer - with a sumptuous show featuring six monumental paintings on wood that pulsate with colour and energy. On the surface, beneath the thick layer of paint mixed with sand or charcoal, lies a collection of miscellaneous tools, dismantled and put back together. They form various haunting figures, including Prophet in the Storm and Twisted Lyre, as well as subtly ironic poetic universes, as illustrated by Red Laughing and The Tongue. In this world, the tool - whether hammer, saw, axe or pliers - plays a role that stretches far beyond the practical. It harks back to the hardware store owned by Jim Dine's grandfather, who gave him his first taste of the joy of creating. And, for Jim Dine, it is a language in itself - a language expressing infinite possibilities.

As poet and critic John Yau explains in the exhibition catalogue, Jim Dine's practice, although traditionally associated with Pop Art, actually inhabits the place where happenings, which he pioneered along with various other artists, and abstract expressionism meet. Both these movements "incorporate the improvisation process." This could well be why the artist feels the need to "complicate his painting by adding various tools to the canvas along with reclaimed wood, boots, indistinguishable cans and other rubbish."

This taste for improvisation and the freedom it produces are central to his latest sculptures, At Dunkerque, anthropomorphic totems created from objects assembled in his studio. Cast in bronze and hand-painted in vivid colours, they create an astonishing impression of vitality, heralding a new direction in Jim Dine's work; for the first time ever, Jim Dine has included bronze and aluminium masks in his creations. The enigmatic figures who haunt the joyful, unruly surfaces of his paintings crop up in the more intimate series of Me pieces that round off the exhibition. His fifteen small self-portraits, doused in layers of painting like endlessly worn and scuffed palettes, reveal the depths of the artist's vulnerability. Impassive, free of the need to produce a likeness, these obsessive and cathartic portraits compel the viewer to question the ultimate goal of art. As Jim Dine writes: "When you paint every day, all year long, then the subject is essentially the act of working."

Born in 1935, Jim Dine first gained recognition as one of the pioneers of the New York happenings in the 1950s before becoming a key figure in the Pop Art of the 1960s. A profoundly independent, multi-faceted artist and poet, Jim Dine soon began to strike out on his own. Drawing on sculpture, painting, prints and photography, he has developed an original language, partly abstract, partly figurative, haunted by a distinctive iconography formed by figures from antiquity, tools, hearts and the figure of Pinocchio. Jim Dine lives and works in Montrouge, a Parisian suburb, Göttingen in Germany and Walla Walla on the American west coast.

Since his first exhibition in 1960, his work has appeared in almost 300 solo shows. It also features in over 70 public collections across the world, including at the Metropolitan Museum of Art in New York, Musée National d’Art Moderne - Centre Pompidou in Paris and Tate Collection in London. In 2018, the Musée National d’Art Moderne - Centre Pompidou held a major exhibition centring on works the American artist donated to the museum. The exhibition travelled to the Centre Pompidou Malaga then the Multimedia Art Museum in Moscow. In Rome, the Palazzo delle Esposizioni held a major retrospective of his work from February to June 2020.

The last decade has seen him creating an ever-expanding body of poetry and he regularly organises readings and performances of his poems alongside his exhibitions.