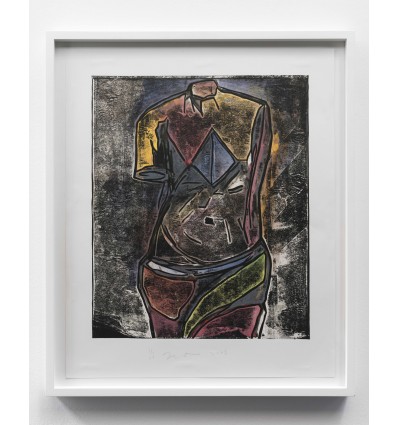 VAT may be applied according to your location.

For his return to Galerie Templon's Brussels space after six years, Jim Dine, one of the most significant American artists of his generation, is presenting a retrospective look at his print work, an art that he has become recognized over the years as one of the greatest masters.

Born in 1935, Jim Dine first gained recognition as one of the pioneers of the happenings in New York in the late fifties before becoming a key figure of the Pop Art movement in the sixties. A profoundly independent, multi-faceted artist and poet, Jim Dine soon began to strike out on his own. Drawing on sculpture, painting, printmaking and photography, he developed an original language, partly abstract, partly figurative, haunted by a distinctive iconography formed by antique figures, tools, hearts or Pinocchios.

At the age of 17, when he was living with his grandparents in Ohio, he discovered the book Modern Prints and Drawings by Paul Sachs, former head of Harvard's Fogg Art Museum. "It changed my life," the artist declares. Fascinated by woodcuts, he started to carve his own plates in the carpentry workshop of the house's basement. Over the years, printmaking became central to his practice. Curious of every technique, he refined his art by travelling around the world, seeking to learn from masters such as Aldo Crommelynck in Paris. He experimented with a large variety of complex techniques, from xylography to collagraphy, intaglio, lithography, carborundum, photogravure, aquatint and digital printing. Jim Dine sees the creative process as an exhilarating experience, as crucial as the finished work. Both the collaborative work and the artist's need to let go when faced with the technical nature of printmaking are essential. As he explains in A Printmaker's Document (Steidl 2013): "One of the reasons I love printing is that painting is a lonely business, and so when I go to a workshop I have the camaraderie of other people, and I feel a kind of relief that there’s some responsibility that’s been taken off my shoulders. The responsibility of realizing the print is taken from me by experts, and therefore it gives me time to think about the image and not have to worry about the craft of it. I have the privilege of thinking only about my inventive way of working."

The question of the multiple is secondary to him, as he retouches many of his prints by hand. "I don’t care about making editions. If there was just one of each images, I’d be happy. The thrill for me is inventing, and adding or taking out, changing from one state to another. Hand coloring over a woodcut that’s in black and white then printing the block again over the color that I painted on then taking a rag soaked in turpentine and rubbing it over the print then put an etching over that. It’s more than that, though it is the freedom to change when I want to and for the image to grow."

The twenty-four works created between 1981 and 2015 and gathered together in this exhibition bear witness to this joy of discovery and the pleasure of producing variations on a handful of favourite themes. The heart, symbol of the palette and the feminine, sits alongside ghostly bathrobes, self-portraits in hidden form, and several incarnations of the Venus de Milo, ageless emblem of Western culture and lost civilizations.

Jim Dine, now nearly 85, lives and works in Montrouge, near Paris, Göttingen (Germany) and Walla Walla on the American west coast. Since his first exhibition in 1960, his work has appeared in almost 300 solo shows. It also features in over 70 public collections across the world, including at the Metropolitan Museum of Art in New York, Musée National d’Art Moderne - Centre Pompidou in Paris and Tate Collection in London.

In 2018, the Musée National d’Art Moderne - Centre Pompidou held a major exhibition centring on his twenty-six-work donation. The exhibition travelled to the Centre Pompidou Malaga then the Multimedia Art Museum in Moscow. In Rome, his work is currently the subject of a major retrospective at the Palazzo delle Esposizioni (until 2 June 2020). In spring 2020, a collection of his prints will be shown in France as part of the inauguration of the Fondation Helenis-GGL in Montpellier and his commissioned work Faire danser le plafond, a ceiling specially made for the 17th-century mansion in collaboration with the Manufacture de Sèvres.

Chiharu Shiota - Connection to the Universe

Chiharu Shiota - Navigating into the Unknown