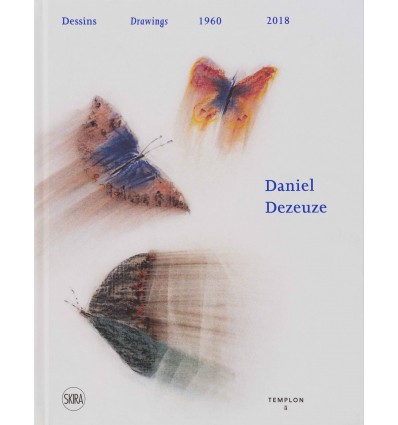 Monograph published on the occasion of the exhibition From a certain Angle, Galerie Templon, Paris (France), 2019
Texts by Olivier Kaeppelin and Pierre Manuel (English and French)

As early as the 1960s, Daniel Dezeuze, a founding member of the Supports/Surfaces group, foresaw this exponential evolution.

Since then he has sought to deconstruct the traditional media and materials of painting. Radical to the core, Daniel Dezeuze has used the stretcher as a tool for questioning and reassessing. Freed from the canvas, he flips paintings against the walls, playing with empty spaces and three-dimensionality: by going beyond the limits of artistic traditions, Daniel Dezeuze opens up a new space.

In the first part of this new exhibition, Daniel Dezeuze pays tribute, in his own way, to the art and paintings he loves: angles, brightly coloured frames, open-work surfaces. Halfway between painting and sculpture, his unclassifiable oeuvre lies ‘between between art, laid bare by the laying bare of the painting, and its relationship to space,’ explains Guy Tosatto.

Mirroring the publication by Skira and Galerie Templon of Daniel Dezeuze, Drawings, 1960-2018, a monograph dedicated to the artist’s different drawing periods (with texts by Olivier Kaeppelin and Pierre Manuel, 320 pages), the second part of the exhibition focuses on Daniel Dezeuze’s drawings.

Born in 1942 in Alès, France, Daniel Dezeuze was one of the founding members of the Supports/Surfaces group in the 1970s. His work seeks to explore and question the concepts that underpin painting, galleries and space. The artist appropriates a wide variety of techniques, offering a reinterpretation of American art, both abstract and minimalist, while constantly experimenting with what are seen as basic materials: net, metal gauze, wood, fabric and metal.

Jim Dine: Jim - As I Know Him - with an original lithograph