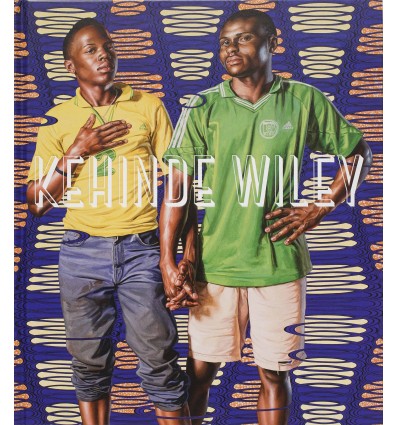 From July 10th to November 1st 2020, the Centre d’Art de La Malmaison on the Croisette welcomes one of today’s most sought after international stars, the American artist Kehinde Wiley. The Centre d’Art la Malmaison unveils over 20 epic works, representative of the vast vocabulary that has guided the artist’s work for more than a decade.

Drawing his inspiration from the Old Masters, from Titian and Gainsborough to Van Dyck and Ingres, Wiley presents a uniquely political and aesthetic perspective, making visible history’s invisible figures, allowing the viewer to engage with the notions of perception as it pertains to power and place.

Kehinde Wiley has traversed the world since 2006 as part of his The World Stage series, whereby organizing local studios and utilizing street casting of denizens from the favelas of Rio to the cramped streets of New Dehli. He uses chance encounters with young Black and brown men and women to create Baroque portraits, brimming with the vestiges and fanfare of the Old Masters. Kehinde Wiley is a descendent of that long line of portraitists. He offers reinterpretations of traditional easel painting vernacular, instilling power and prestige onto the young men and women who are rarely viewed as such.

Delving into the issues of racial and sexual identity, Kehinde Wiley’s works create unexpected conversations where art history and Black culture emerge fluidly. The artist brings to the forefront those who have historically been banished from the halls of power and the access found therein. His politically charged work is an investigation of race, representation, privilege, and excess. They are an indictment on history and who determines its definition.

Through this majestic retrospective, the first in France, one can fathom how a vast body of work can both question and participate in the Western art historical canon of portraiture. Kehinde Wiley invites us, we Europeans, to rediscover a painting whose artistic intensity we have, perhaps, forgotten at a time when the continent is experiencing an identity crises that is continuously evolving. Welcoming such a monographic exhibition to Cannes, Kehinde Wiley materializes the international aspirations the city has regarding the importance of contemporary art.